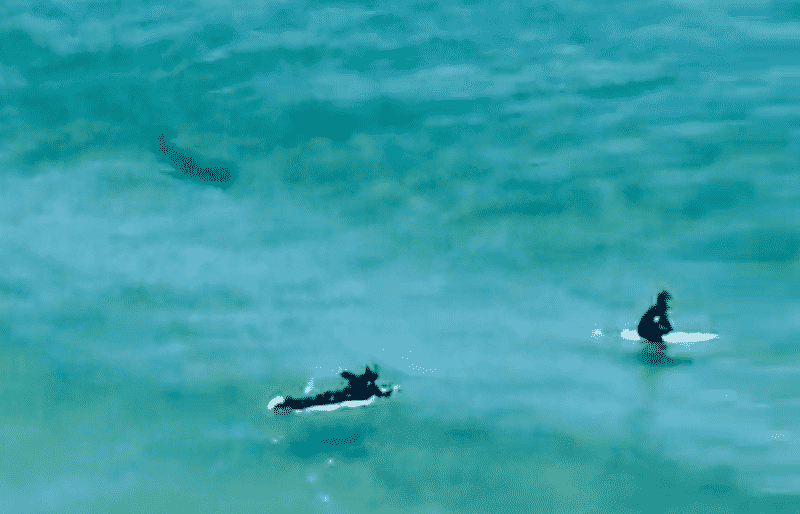 A massive Great White Shark filmed yards of surfers and swimmers in a scenario similar to a deadly shallow water attack on a bodyboarder on the same beach!

Read the incredible foreword to the hottest new book on surfing!

My fondest memories as a publisher date back to the years 2000 to 2013. The pleasures of the Internet existed, but not yet all-consuming.

Social media was largely the preserve of teenagers. Physical surf checks led to chatter, brainstorming and talking stories. Time flew by at TSJ, and we greeted each working day with the anticipation of Christmas morning.

What new stack of transparencies from a distant place or undiscovered archive might be discovered?

What page of the bedside notebook would take flight, hammered into a line by the alchemy of the world of print between writer, printer and designer?

The rush to see the work in print, the preferred form of Internet users around the world. The joy of going through a year with the assumption that numbers would be cataloged on shelves and private surf tables for years, if not decades.

It was not high art or Austrian economics. But it was, and remains, fun stuff.

There was an attractive magnetism at play, and visiting surfers, writers and photographers couldn’t help but feel it. We jokingly called it the ivory tower effect. The Journal has been taken seriously around the world, but for us creators, we’ve never worn it like this.

The high-end feel of the physical product kept us free and broad-minded, reflecting the subject matter. We were free to pursue the things that appealed to us in the first place.

Adventure, both accessible and more ambitious. The vibrant and moving story of the pioneering players. To travel. Knowledge of Waterman. Individual expression. Commercially unfettered, we’ve just steered clear of the parts of surfing we weren’t interested in (little bit, to be fair) – mostly organized surfing stuff like pro contests and pop-idol BS.

Turns out, that struck a chord.

We’ve seen 110% growth over those years – unheard of for a “mid-career” title at the turn of the millennium – from quarterly to “quinquennial” to bi-monthly.

This angle has served us well. We are here. All the others have left.

It started from the top. From a management perspective, one of Steve Pezman’s koan-like mantras was typical of his personal laissez-faire belief system: “It’s not a problem until it’s a problem. “

And when you had Pezman’s right eye for talent that could go the distance – ten, 15 or 20 years – it was hard to argue. We would commit seppuku before letting our life’s work go into the tango uniform.

The potential loss of readers lasted like a razor second. Our sponsor advertisers? They seemed to trust us explicitly, without any veiled threat of a checkbook.

There was an easy joke at the dojo, with a light team floating around ideas in a free spirit. Like today, the players were there for exactly the right reasons.

And a few times a week we would meet at a local touring surf spot. It was a study of easy efficiency: ten minutes on the road, an hour of surfing and 30 minutes for lunch. If I roll my eyes back and summon the days, I can remember each one:

It’s 2 p.m. on a Wednesday in 2013. That calm, sunny, après-surf feeling prevails on the back patio of La Tiendita Market in San Clemente. Nothing boyish. No assignment new, middlebrow. A taco joint. Completely surfing.

Chewing on a shard of adobada tostada, Pezman mentally lines up his shot. Wandering pieces of iceberg lettuce adorn his Metzger Plumbing t-shirt. Everything on his plate was mixed and drizzled with a palette of sauces.

Now he pours from a ramekin of chile de modesto that he had asked the taqueria to produce. (Note: Pezman makes ad hoc collages from any offerings: a platter of onion pancakes from the Sino-Muslim joint; the preciously plated assemblages from Saint Helena; a picnic in the courtyard of the 4 July No LA Times-approved chef of the season is beyond such wood-chipper treatment Pezman unashamedly identifies himself as a “foodie,” that normally squeaky semi-suitcase of “foodie.” and “yuppie” (knowing the record of 17 sundaes he once killed at Jerry’s Sweet Shop in Haleiwa.)

The next bite of adobada can wait.

“I think I learned how some writers bloat a novel up to 400 pages,” he says.

It refers to a detective book by Harry Hole. He’s a sucker for the genre and always knows the loftier offerings.

“Turns out you can squeeze a thousand words out of a simple description. An overripe tomato, a purse. Nothing? Really.”

This revelation will be tested in stores later in the afternoon as he writes the intro for an interview. Indeed, he is as eager to get back to the office as he is to surf.

We are all. Round pegs in round holes.

Pezman is always curious to learn more about crafting and he takes the how and why of magazine making seriously. But he always had a lively and youthful enthusiasm for his many activities: surfing, painting, tennis, gastronomy, reading.

When it comes to practicing, like all masters, he makes it look easy.

No time for pinched angst.

“We surf-mag makers happily work in the toy department of global business,” he says.

Magaziners are born into the game, not by birth, but by lifelong habit.

In this game, it is a story.

And he’s a rare editor/writer/editor who isn’t an avid reader of fiction, a student of fine art, street and portrait photography, book design from the golden age to today. today.

And Steve Pezman – as the son of a playwright who lost his job after the fallout from the hollywood ten blacklist — is no exception. He reads avidly and was somewhat of an artistic phenomenon as a child.

During his days at Surfer magazine, his promotion on the editor-to-editor battlefield moved quickly, forcing him to harness his innate—and, ultimately, estimable—business acumen.

It involves an art-to-business pivot, but Pezman, having come from the publishing side, maintained Surfer’s focus on sharp writing during his 20 years there. Although marked by an ease with numbers, it was history, in words and images, that fascinated him.

In the heyday of print, every surf monthly had great photography. The dividing points were often the furniture of words: concepts, titles, captions and, of course, the written pieces themselves. Pezman immediately surrounded himself with complementary magazine enthusiasts.

Like his contemporary Drew Kampion, Pezman captured the era as he saw it. Voice, passion, nuance…

The American surf magazine (and therefore each of the international versions written behind the creators) has never trusted journalism’s ability to capture the ineffably layered experiences of our act.

The tradition of surf publishing of idiosyncratic, esoteric, cosmic-tinged reportage was at its height in the early 1970s. Pezman embraced it all, then moved forward into each new micro-era of surfing. Always keeping in mind the purist appeal of the blue wall, it has skilfully survived the decades.

And whether or not you’ve had the pleasure of working with him, you still know Pezman from his half-century of surf writing and publishing. He has guided the media representation of surfing from his Surfer and The Surfer’s Journal chairs on more than 100,000 pages.

While you may not have shared the lineup with him, you’ll know his voice – that baritone, senatorial brogue – from his dozen or so appearances in those popular pre-release surf documentaries circa 2004: The Framing of the head and shoulders; the bright lighting of the 90s; a bottom frame centered on the chyron nameplate.

Pez, as everyone calls him, would thus become eloquent, dropping gift-wrapped musings defining his impressions of the act.

“Dancers on a liquid stage” and others.

But don’t let Zen Kabuki fool you. For anyone who really knows him, he’s more Shakespeare’s Hal than Bodhisattva-failure: quick-witted, improvisational, generous with a payout (and when he receives it), and infinitely flexible.

That doesn’t mean it doesn’t reach the cosmos.

Second, it makes surfers feel slightly superior, like we have access to a scrambled pirate radio channel for all but the experienced.

This stance no doubt has its roots in the Pezman come-up of the 1950s. Surfing was then seen as a teenage dance craze, its hormonal, coca-cherry-stuffed participants doing the Frug to pop twerp full of Jan and Dean reverb.

At this early stage, little attention was paid to the ride itself. This would have irritated Pezman, and any other surfer of the time. Parents, bosses, judges and juries wouldn’t sit around hearing about the incalculable natural gifts of surfing. The tee-vee showed them everything they needed to see.

And so, surfing could have gone hopelessly pop. Contests, gossip, uproar. (No offense, almost every online surf magazine in 2021.)

Pezman chose a different path, marked by literature, art and the conscious language of custody. Advocacy for highly skilled boatmen living on the margins. Stimulating in a solid dose of pure, empty wave energy. The strange hit of large format underground hippie rap.

This last bit of lingua franca was a product of the times and to modern ears it may sound almost quaint. Even this indulgence tended to smoke out its competitors. Imagine where he might have gone had he landed in another, more challenging stewardship.

As always, deaf, influence-hungry forces with more spreadsheet chops than taste attempt to brand the surf with their mercantile prerogatives.

The barn door was ripped off its hinges.

“The Secret Thrill” is now so oversubscribed, atomized TikTok and mass media that any claim surfing once had as a pursuit for strangers, an outpost of post-Beat hipness – that such a claim really holds. the road or not – is more or less a duck.

This Pezman blend volume serves to show off the author’s steady hand, self-knowledge as well as molecular – say it! — cosmic understanding of all surfing.

Once we get all the pancake off we hang on to the surf – that’s another “Pez Says” – just the ride.

And, fortunately, the trip is enough.

The Fiji Times » Point of Origin: The Ocean Adventurer