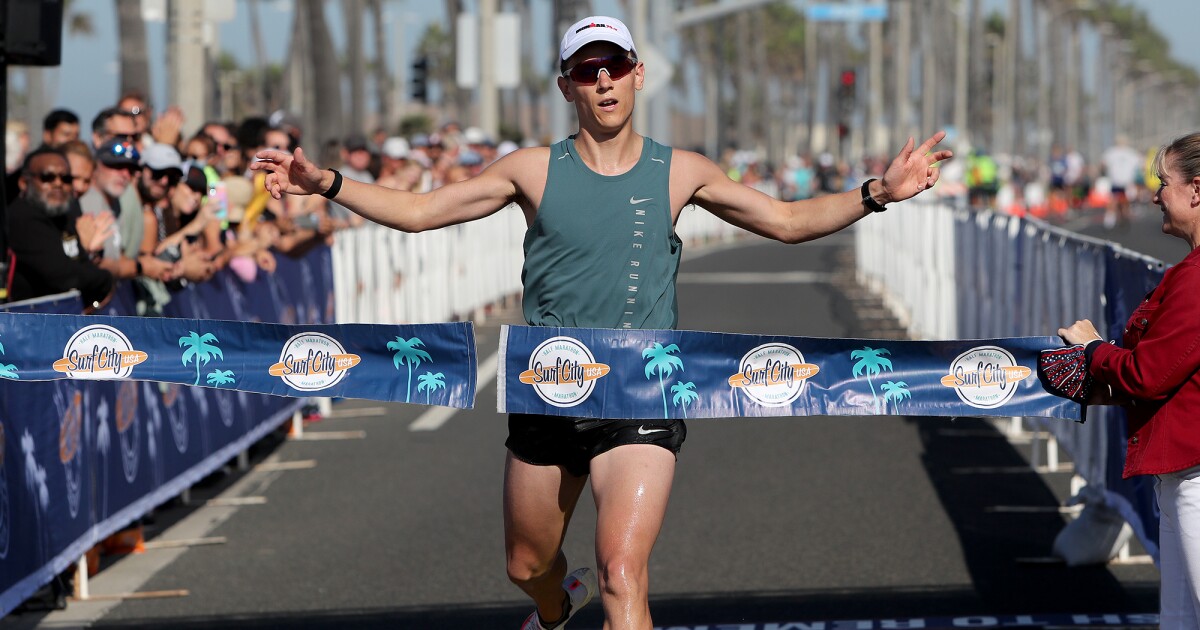 Around town: PCH will close in Huntington Beach on February 6 for the Surf City Marathon

The Pacific Coast Highway in Huntington Beach will be closed to traffic for much of the day on Sunday, February 6, due to the annual Surf City Marathon race.

For more information on the marathon and other road closures, visit runsurfcity.com.

All three intersections currently have a yield sign, which will be replaced by arrow signs.

Work began at the three intersections on January 8 and is expected to be completed in late March or early April.

February’s book selection is Colston Whitehead’s “Harlem Shuffle,” featuring a struggling furniture salesman who begins dealing with stolen jewelry on the side.

The online event URL will be sent to the email address provided during registration.

The City of Newport Beach is accepting applications to serve on the three-seat Master Plan Update Steering Committee. The application period closes at noon on February 16.

The committee shall meet weeknights or weekdays Monday through Thursday — at a time convenient to committee members — at 100 Civic Center Drive. A request can be obtained at the city clerk’s office or can be mailed by calling (949) 644-3005. The application and information about the committee can also be found on the city’s website at newportbeachca.gov/vacancy.

The Newport Beach City Council approved the formation of this committee at its last regular meeting on January 25. There has not been a full update to Newport’s general plan since 2006.

Volunteers and visitors will be allowed to return to Newport-Mesa Unified School District campuses starting next Monday after nearly a month away as cases of the Omicron variant of the coronavirus spike.

Volunteers will need to register through the district’s Raptor volunteer system. Those who have already registered this year will not need to reapply. Current processes for vaccinated volunteers will resume, including providing proof of vaccination among other requirements.

Unvaccinated volunteers will be asked to provide a negative COVID-19 test upon entering a school site, performed within three days.

As of Friday morning, there were 417 cases between staff and students across the district.

The 40th annual Mayor’s Dinner, which will feature Newport Beach Mayor Kevin Muldoon delivering the State of the City address, has been moved from its usual February date to Thursday, May 19. The winter spike in pandemic-related coronavirus cases has caused its delay.

The event will take place at VEA Newport Beach, officially known as the Newport Beach Marriott. The Speak Up Newport (SUN) Board of Directors is sponsoring the event. For more information, visit speakupnewport.com.

UVSA Tết Festival next weekend at the OC Exhibition Center

The celebration will feature traditional food, entertainment and cultural exhibits to welcome the Year of the Tiger.

Admission is $8 and parking is $10. For more details visit tetfestival.org

‘Mamma Mia’ will be performed at Vanguard University

The musical “Mamma Mia” will be presented at the Lyceum Theater on the campus of Vanguard University for three weekends, from February 25 to March 13.

“I’m so thrilled to have the opportunity to put my spin on ‘Mamma Mia’ at Vanguard University,” said director Nikki Snelson. “Mamma Mia” is an upbeat and uplifting musical about relationships, love, loss and forgiveness, featuring the iconic music of global superstars ABBA! You will laugh. You will cry. You will dance in the aisles.

The production is suitable for teenagers and older people. Ticket prices are $20 for general admission and $16 for seniors, children, students and groups. Tickets can be purchased at vanguardtickets.com or by calling the box office at (714) 668-6145.