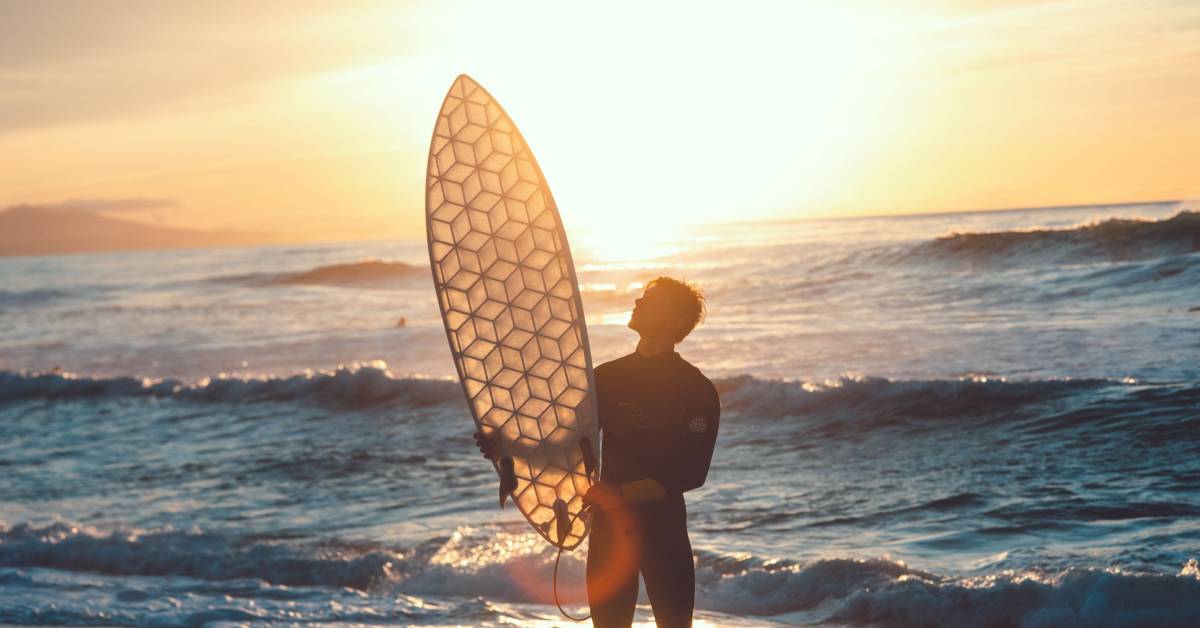 Surfboard shapers have been cutting boards from foam blanks for over half a century. Today, many industry players are looking for panel construction methods that reduce environmental pollution.

A recent trend in 3D printed surfboards has opened the door to new ideas. Wyve, a French company based in a Basque beach community, seems to have set the new benchmark for durable surfboard designs.

The Wyve range of boards use an internal hexagonal structure that traps air inside instead of using a traditional foam blank. Contrary to other 3D printed boardsthe process completely bypasses polystyrene or EPS foam.

Instead, it prints its hexagonal cores from PLA, a recyclable bio-based plastic made from fermented corn starch. Additionally, it is committed to adopting a locally-based manufacturing and distribution model.

The method demonstrates the company’s strong position on environmental ethics in surfing. According to initial internal testing and research, the construction also boosts the performance of its boards in some key areas. And despite what the 3D printing process might entail, custom shaped panels do not incur any additional cost to the customer.

“We are trying to rethink the way we make surfboards,” said Leo Kerhir, head of international sales and development at Wyve. “We want to make them more efficient and more durable. By using bio-based materials and technology that we have developed in-house, we are able to do this.

“By buying traditional surfboards, the surfing community is inadvertently supporting a process that uses petrochemical materials and generates toxic waste,” Wyve States. “Whether in the small local shaper’s warehouse or in famous Californian factories, for 60 years polyurethane and polyester have been polluting our air and our oceans.”

To limit its emissions profile, the company is committed to collecting materials and manufacturing the boards locally. She calls the facilities that anchor the method “micro-factories”.

Kerhir said the company’s growth model revolves around establishing micro-factories and distribution networks along each coast it plans to expand to. For now, the company delivers boards exclusively in Europe.

Local materials will remain a priority. A PLA manufacturer, Total Corbion APL, has factories in the Netherlands and Spain and a sales office in France. And while Wyve epoxy coats its fiberglass panels for durability, it uses bio-based epoxy resin made in France.

Durability aside, the majority of surfers probably won’t find Wyve boards “better” unless they surf comparable to traditional boards. So far, Kehrir reports, the outlook is positive.

Buoyancy and fixability seem to be the main strengths of the board. Testing has shown that air filled boards can float even better than their foam core counterparts and perform the same for wave entry.

They also seem to have a clear advantage when it comes to ease of repair. If you hit a traditional board and puncture the hull, it will eventually soak and yellow unless you heat dry it and patch it.

But Wyve’s boards have an air valve that regulates the pressure inside the board and allows drainage in the event of a puncture. When you have a ding, all you have to do is drain it (the interior walls have openings to let water in) and fix it.

Kerhir confirmed that the weight is similar to polyurethane panels. He also specifies that the hexagonal structure is three times more resistant than a foam blank but retains the necessary flexibility. In fact he said magic seaweed3D-printed cores help the company’s shapers control parameters such as flexibility, mass distribution and strength in key areas.

Finally, plastic cores can also increase the ability for custom shaping. Wyve offers 18 stock board shapes in 10 sizes each, suitable for different styles. But it also offers a questionnaire-based control program tap into specific needs. After a conversation with the surfer in question, Wyve uses a logarithm to inform his design process.

Consultation and personalized formatting are at no additional cost.

“The stock shapes and sizes cover many people. But many surfers want to have their surfboard, with specific changes from the base board,” Kerhir said. “So we’re offering customization at the same price, which we can do with technology.”

When asked if he thinks 3D-printed boards will become the new normal, Kerhir expressed optimism that Wyve’s method will find traction among intermediate to high level surfers. He said that because the company’s system allows for both precision and scale production of custom boards, Wyve is “convinced that 3D printing is the future” for performance-oriented surfers. .

Discover Wyve’s website to learn more about its process and discover its range of 3D printed biodegradable surfboards. If you want to buy one in Europe and ride it this summer, act now; Wyve is trying to reduce lead times, but current demand places delivery dates 90 days from the order date.

Watch Bethany Hamilton and other World Surf League contenders put on a show on day three of the Da Hui Backdoor Shootout in Hawaii. Read more…

Xiaomi reveals the list of smartphones receiving MIUI 13 in India