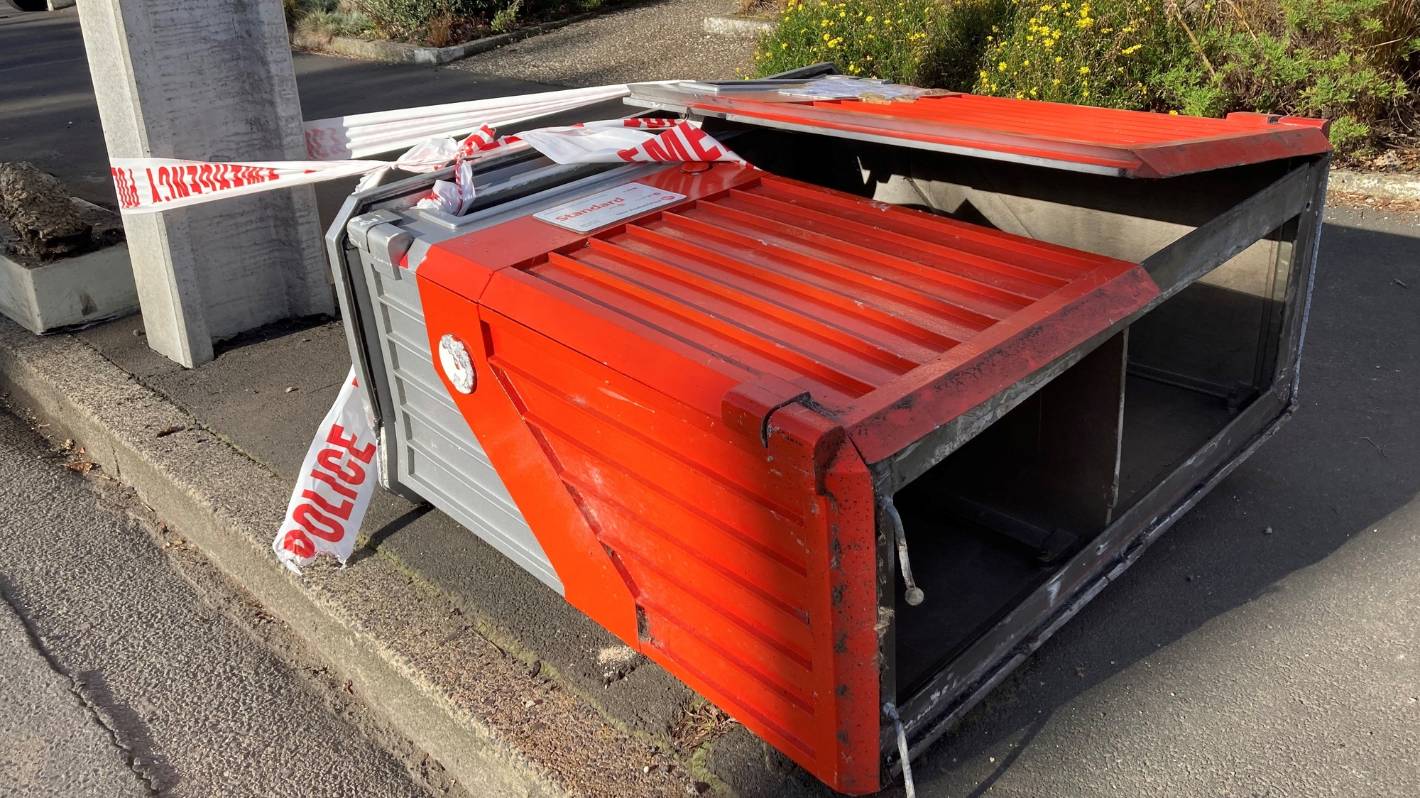 A postbox in the Dunedin suburb of Caversham, did not survive the weekend as the driver who caused the damage has yet to be located.

Several calls about a man wielding a gun led police to arrest a man, who was found in possession of a starter gun.

The 26-year-old was showing passers-by what they believe to be a gun as they walked past him on George St around 3am on Saturday.

Police found him with the starter gun tucked in the waistband of his sweatpants, Senior Sergeant Anthony Bond said.

The man was charged with possession of an imitation firearm and presenting a person with something believed to be a prohibited firearm.

READ MORE:
* Store manager repeatedly hit by person with skateboard
* ‘Recipe for disaster’: Drunk teenage driver caught on Dunedin’s busy Castle St
* Six in a car driven by a drunk driver – including one in the trunk

Police were called to an address on Gt King St, after reporting that a man – armed with a knife – entered an address with associates at around 10.30pm on Sunday.

“He had a beef with some of the occupants there.”

The knife was found on a balcony and the 26-year-old man was found hiding in a vehicle behind the address.

He was arrested, but after being taken to the station he assaulted a female officer, Bond said.

He was charged with committing burglary with a weapon and assaulting police officers.

A man who believed he had left his phone in a taxi found himself in police custody after smashing the window of a taxi company at 4:20 a.m. Monday.

Police were called to the Leith St depot, after the intoxicated man repeatedly knocked on the door before breaking a window.

The man was released and not charged, and would pay the damages bill, Bond said.

Police attended an accident where a vehicle hit a power pole and a New Zealand postbox outside Mitchell’s Tavern, Caversham around 8pm on Monday.

The driver fled in another vehicle and has not yet been located, Bond said.

“Alcohol was suspected to be involved.”

Police were disappointed by the number of drunk drivers arrested on Saturday, with several recording high readings of up to five times the legal limit.

This included a male driver stopped at a checkpoint on Cumberland St around 7pm on Saturday.

The 38-year-old recorded a breath alcohol reading of 1168mcg, his license has been suspended and he will appear in Dunedin District Court charged with drunk driving.

“His explanation was that he only had a beer with dinner.”

A 49-year-old driver was arrested on Highcliff Rd and recorded a breath alcohol reading of 1336mcg on Saturday around 5.30pm.

Police attended a bizarre call in Serpentine Ave, City Rise, after a 21-year-old threw objects into traffic from his balcony on Monday afternoon.

Items include parts of a surfboard, chairs, cans, and other items strewn across the road and trail

The man was arrested for endangering traffic.

Police were called to the local Four Square store in Outram, after a man and woman refused to wear masks as a condition of entry around 3pm on Saturday.

Back in Dunedin, police spoke to three young men who were seen trying to pick up random items from Castle St Flats early on Saturday morning.

The trio said they were only “taking pictures” and were referred to the University of Otago Proctor.

People who earn money just by surfing the Internet