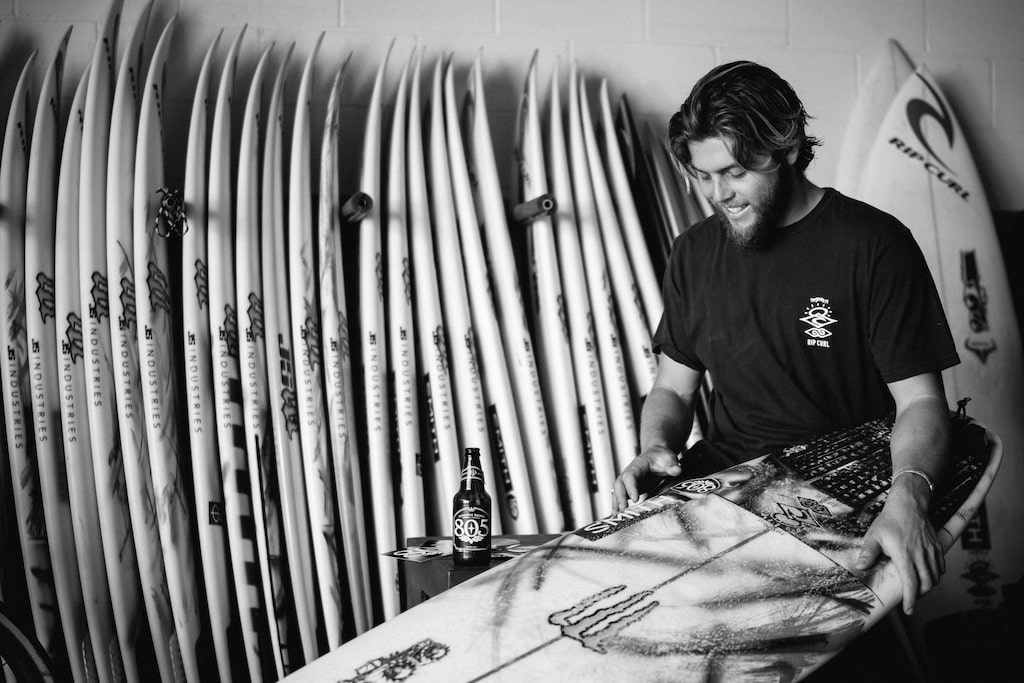 Ethicists and corporate watchdogs are extremely troubled after the World Surf League added another beer as the “official beer partner” of pro surfing ahead of the Australian leg of the tour!

“I feel like I can improve my surfing without even going in the water.”

Sports journalist Will Swanton, winner of several writing trophies, published an archived interview with Kelly Slater on the occasion of Kelly’s fiftieth birthday.

The stage is the outdoor veranda of the Rainbow Bay Surf Club at the now defunct Quiksilver Pro event at Snapper Rocks.

Kelly sucks on a spoon he used to eat his yogurt “like he was smoking a pipe”.

“I can train in my head” he said to Swanton. “I can look at a wave and imagine myself on that wave. I literally have the feeling in my body and in my muscles of what it’s going to be like when I’m going to ride this wave. I didn’t ride a wave for three weeks before I got here. I went out and felt like I had surfed everyday. It’s something spiritual for me. It’s just anchored in my muscles and connected to my mind. Somehow I feel like I can improve my surfing without even going in the water.“

The conversation turns to the Snapper mobs.

“Two days ago I had someone’s leash wrapped around my neck there. I hit a child yesterday. I bumped into him because I was trying to avoid another child. You stray from one child’s path and meet another. It’s frustrating for all of us as surfers and humans.

“It’s a far cry from what’s happening here in Snapper, unless it’s behind the rock or you’re in Kirra on those rare special days. On normal days here you’re constantly getting run over. You run into people yourself. It’s the same for me, it’s the same for you, it’s the same for everyone. It makes me think that a pecking order is a good thing.

“There’s some weird stuff that comes with pecking order, but it creates a sense of order, for better or for worse. And whatever you think of localism, a pecking order allows people to fit in where they should. Unfortunately, it is impossible to have a pecking order at a place where the wave breaks over a mile. I actually had a few waves at Snapper yesterday, but almost every wave there was someone in my way. You want to be zen but you feel tense.

“A friend of mine was there and we were laughing because I was losing my mind a bit. I said, you know what? I think I need to go to the beach and dry off. Hit the reset button and go back cause I’m really losing it here.

“We are so preprogrammed, for some reason, at the caveman level. We are pre-programmed to survive. The most basic levels are: I need to eat, I need to kill an animal, I need to prove myself, I need to have the girl to be able to procreate – all this genetics and these strange encodings that are embedded in us. They are present in each of us.

Catch up on the rest of the interview here!