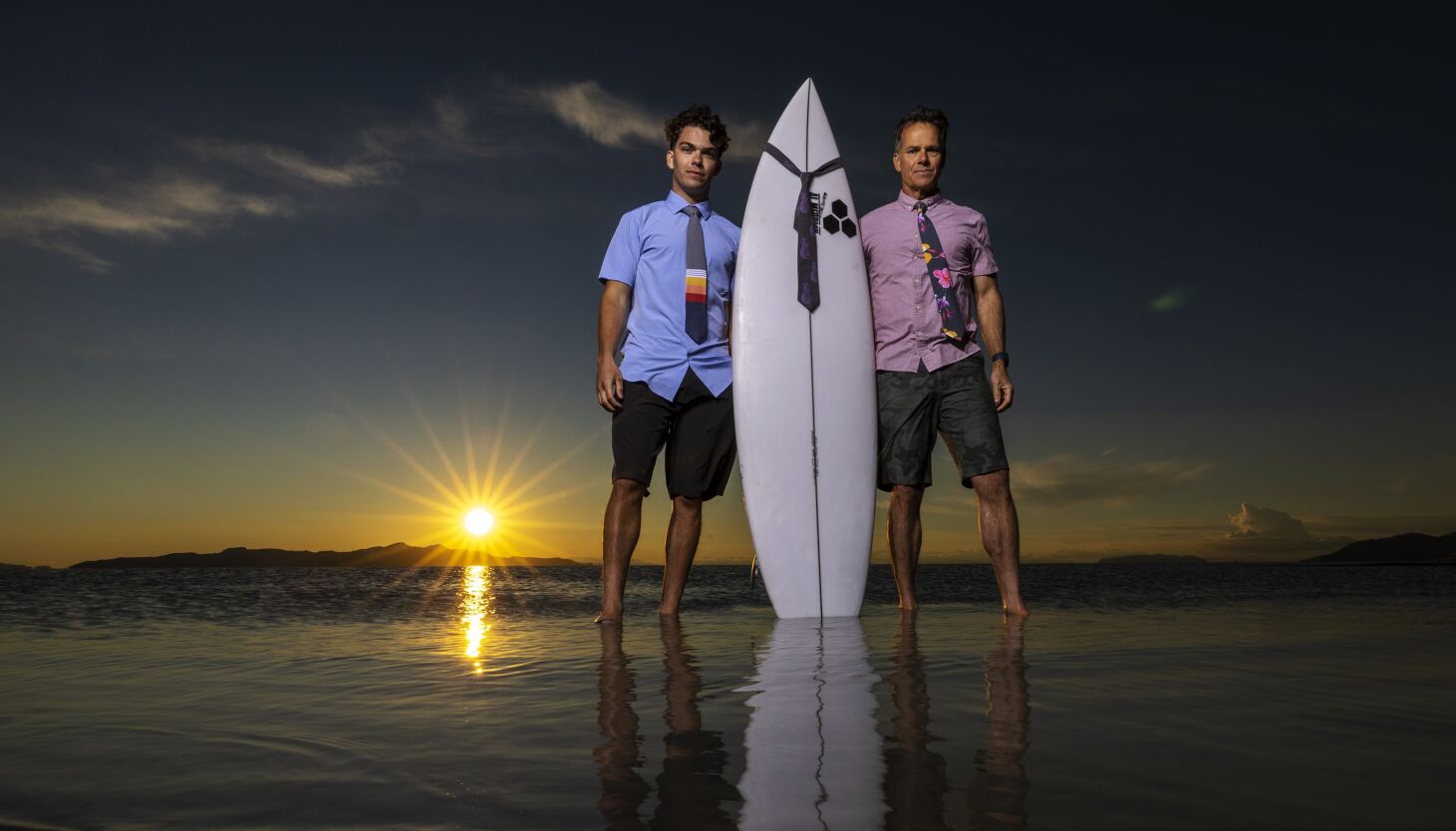 Father and son surfers bond out of boardshort gear

Picture this, a father and son on a beach in Hawaii, taking a break from a surf session, swinging in their hammocks, discussing a business they could start together.

It wasn’t the first time they had done this. For years, Gregg Greer and his youngest son Zeke have been brainstorming. It had become their hobby, trying to imagine something no one thought of until they thought of it; looking for their Steve Jobs moment.

Since action sports are their thing – surfing, snowboarding, skating, anything mountain related – the ideal for them was to find a way to mix business with pleasure; find something they could sell related to what they like.

They were going through all the usual outdoor gear retail suspects: hats, shirts, shorts, shoes, etc., and looked empty. At one point they thought of a dating site for action sports people. They went so far as to pay for a domain name: shreddersonly.com. But after that, the idea more or less fell off a cliff. What did they know about online dating?

Lounging in hammocks in the summer of 2017, they were back to square one.

Then suddenly they had it.

Their inspiration was socks. They were talking about the sock revolution they had seen in church. Everyone always came in their Sunday best, but now Sunday included colorful socks patterned with everything from flowers and palm trees to Star Wars and Jazz logos – worn by teenagers and grandparents and everyone else. world in between, including Gregg and Zeke.

And it wasn’t just in church. It was everywhere. Stance socks had become a household name almost overnight. “Before Stance, we had never seen a pair of socks in a skate shop or a surf shop,” recalls Zeke. “They took a forgotten category and made it cool; we wanted to do that too.

Knowing nothing about tie making, after returning to Utah, Gregg and Zeke signed up to attend the Magic Fashion Trade Show in Las Vegas, an international gathering of entrepreneurs and innovators.

They were wandering the aisles when they came to a booth showcasing the stretchy, water-absorbent, quick-drying, stain-resistant, and virtually indestructible fabric used to make boardshorts.

It was just the material they were looking for to bond with surfing.

The man running the stand, they learned, was the engineer of the material used by many of the world’s top surfwear companies. He was from China and did not speak English. The Greers didn’t speak Chinese. It didn’t matter. Through hand gestures, they bonded and successfully brokered a deal to have 50 yards of the boardshort gear sent to America.

When the package arrived, Gregg passed the fabric to Amy, his wife.

The kid Gregg was teaching looked at the colorful tie that looked like swim shorts and said, “I’d wear one.”

Zeke and Gregg named their fledgling tie company Bombora – an old Australian word that describes the big wave that crashes offshore during a storm – and made other prototypes, which they passed on to friends and family. family.

“The feedback has been universally positive,” says Gregg. “I know that’s not always a good thing because people will never tell you your baby is ugly. But enough people have said, ‘Where did you get that tie?’ that we thought maybe we were onto something.

By this point, Zeke had been college educated at the University of Utah, majoring in finance, and was at a career crossroads. Should he accept job offers from companies or delve into ties full-time?

“I chose the path of entrepreneurship,” he says. “Having more flexibility and control over my time felt better than going the more conventional route.”

In mid-November 2019, just weeks before graduation, Zeke and Gregg, along with Zeke’s sister Kensie as creative director and graphic designer, launched their website, bomboraties.com. They had a tagline: “Boardshorts for the boardroom” and a sales pitch: “If you have to wear a tie, why not wear one you like?”

“It was awesome and we were selling ties and had a lot of excitement,” says Zeke. “Then COVID hit three months later – and we were dead in the water.”

Zeke found work teaching snowboarding, Gregg still had his day job, so they survived. The question was: the links?

Then the pandemic granted an unexpected blessing because the lockdown shifted their first-surfer purism to the larger market waiting at their feet: namely, Latter-day Saint missionaries.

“We wanted to first create a brand and be accepted in the surf industry. We thought if we went to sales to missionaries first, it wouldn’t work as well,” says Gregg. “Then we decided it didn’t matter. We say to ourselves: ‘We should probably sell ties to people who buy a lot of them.’ »

As the pandemic began to lift, Zeke managed to place Bombora ties in Mr. Mac stores, then Modern Missionary Menswear in Orem and other missionary-themed outlets.

It’s a perfect fit for missionaries, says Gregg. “You can fold it, scrunch it up, throw it in the back of your car and drive around for a month and put it on and it looks the same.”

Not that the Greers have given up on other markets as the economy reopens, especially the surf market. This summer, their plan is to head to California and hit some surf shops along the coast.

While they’re at it, they’ll also hit the surf spots along the way.

Business meets pleasure. Exactly what they were aiming for.

Supermodel Carolyn Murphy’s secret to getting dressed in the morning