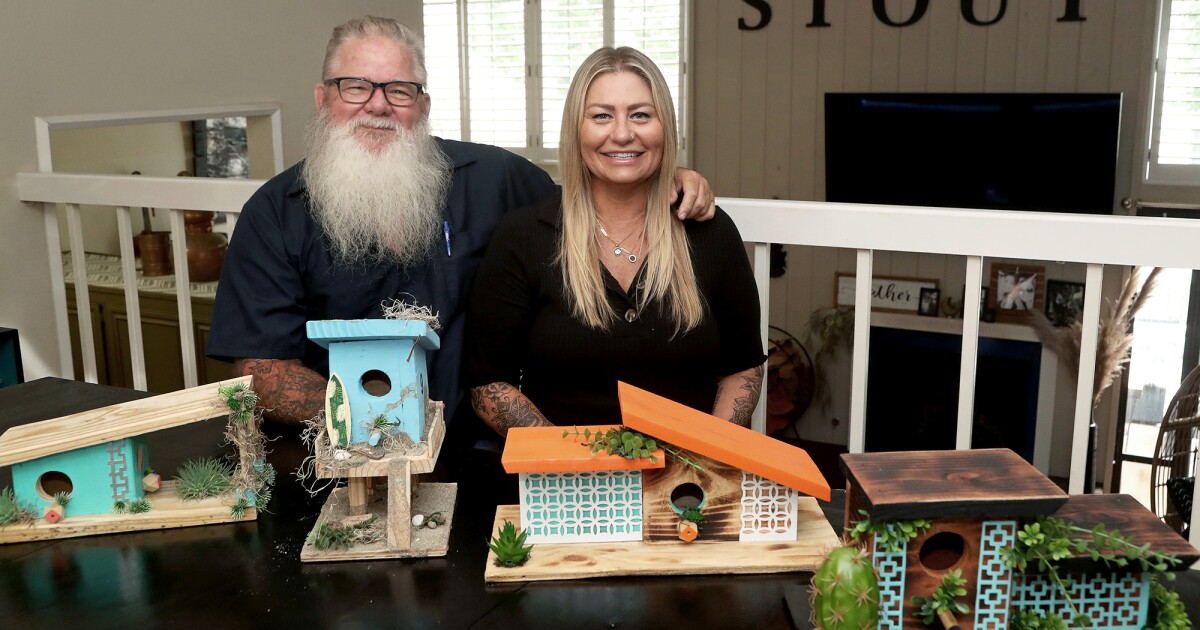 The Huntington Beach real estate market can be tough to break into, unless you’re a bird.

Over the past two years, husband and wife duo Jason and Lynne Stout have designed and built specialty birdhouses, including mid-century stunners, lifeguard towers and custom-made miniature replicas of beach huts, barns and family homes for one local. crowd.

“On this cabin, I used rocks and made a little fire pit with twigs inside,” she said, describing how she can add moss and succulents to dress up a dwelling or place a small surfboard in the front. “I’m not an artist or anything, I’m just creative.”

The Stouts have built hundreds of bird houses, taking and fulfilling orders on Facebook and Instagram. They’ve even branched out to offer a line of home decor and furniture made from pallets, whiskey barrels, and other reclaimed woods.

It is not a business per se, as both husband and wife have regular jobs. It’s more of a hobby, something to occupy the couple and a passion that has turned into a side hustle.

“The beautiful thing is that we don’t have a plan,” Jason said of @jpluslcustoms, modeled on their initials. “We’re just doing this for fun, and if people want something, we’ll do it.”

Although this joint venture took off during the pandemic — when, according to the Stouts, people were sheltering in place and searching online for ways to spruce up homes and enjoy backyard nature — its roots go back more than two decades.

After the Huntington Beach couple, now in their 50s, temporarily moved to Idaho with their young son and daughter, Jason wanted to find a way to thank Lynne’s parents for helping them buy a house there. . They didn’t have much money, so he improvised.

“It was my first winter in a cold place, so I built a birdhouse to do something about it,” he recalled on Thursday. “The roof was a license plate, and for the hole, I used a jigsaw to cut out the state of Idaho. I just wanted to do something to show my gratitude.

This little Potato State-inspired mansion decorated his in-laws’ home for the next 23 years until in 2020 it fell into disrepair and required rehabilitation. While repairing the structure, Jason found the work to be engaging.

“If I have nothing to do, I get very bored and restless,” he says. “It gives me something to do and it’s just a cool hobby.”

What started with lonely messages and photos shared with friends on social media soon spread to local channels. Soon people in Huntington Beach and across Orange County were clamoring for their own birdhouses.

As satisfied buyers circulated photos within their networks of friends, a buzz developed. Lynne estimates that she and her husband built, decorated and delivered 120 birdhouses last year alone.

Among their many buyers is Huntington Beach Realtor Rose Rogers, who saw a photo of the mid-century structures in a community Facebook group and had to have one.

“I thought it would be the perfect customer gift,” recalls Rogers, who creates personalized baskets for buyers and sellers and has since purchased several bird houses from the Stouts. “I also gave them to family members. Everyone has a great reaction to them – they’re super cute.

Rogers ordered a surf-themed room for his dad as a Father’s Day gift and is already planning his next purchase, either a blue house to match his or a lifeguard tower to pay homage to the Huntington lifestyle Beach.

As for the Stouts, they will continue to craft items as long as orders come in. Avid campers, who love to go in search of wild splendours, the couple plan to make mini birdhouses in the shape of a motorhome from coffee cans and collect materials and ideas.

“We want to enjoy it,” Lynne said of the hobby. “If someone doesn’t like something, it doesn’t hurt us, because we’re having fun.”