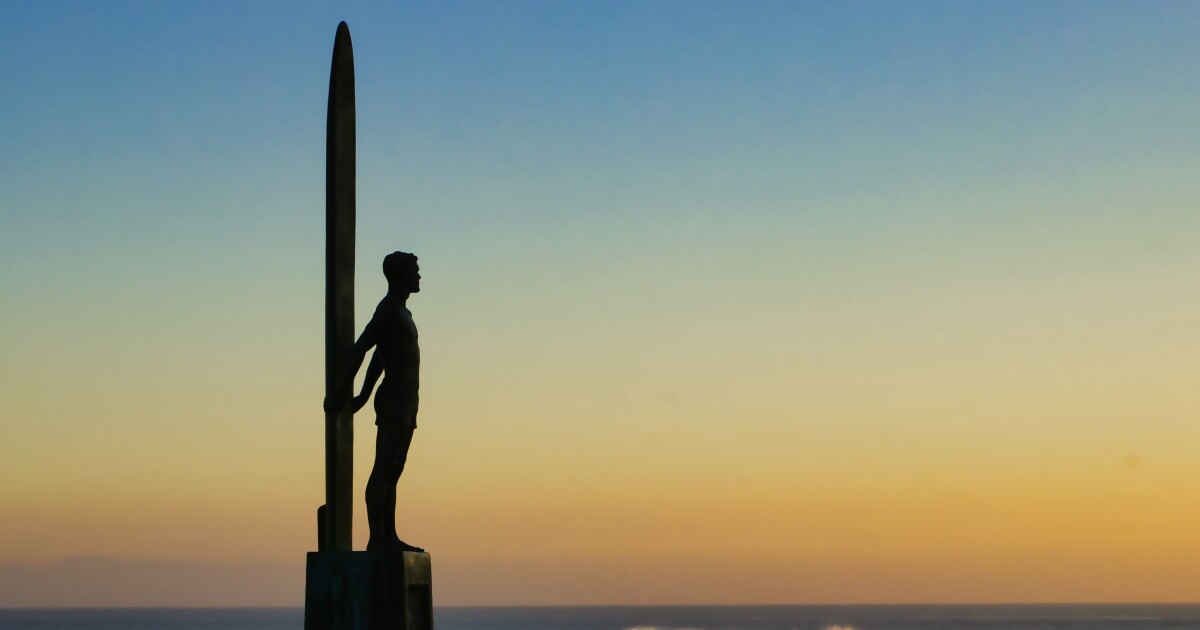 Icons of Santa Cruz: The Centurion of West Cliff Drive

There were arguments and controversies over the proposed statue, its design, size and where it might be placed. At one point, the city council rejected a proposed statue, deeming it too large and dangerous.

“Nothing can be without controversy in Santa Cruz,” said Mike Rotkin, who twice served on city council in the 1980s and 1990s but was not on the council that rejected the original statue proposal. “I remember some of the objections. First of all, some people just don’t like statues in general. You know, ‘It’s a natural environment. Why do you have to gild the lily? A few people have asked about why it had to be male and not female or something more androgynous. Like everything in Santa Cruz, there were those who weren’t happy for one reason or another, but they were definitely a small minority.

Today, 30 years after its erection in Pelton and West Cliff, “Wes” is as iconic of Santa Cruz as any other image of the city. It is used in posters and flyers for events and causes. He is constantly selfied and photoshopped. And it serves as a sort of barometer of the seasons. In October, the handsome young surfer is often masked by a jack-o’-lantern on his head. At Christmas, he wears a Santa hat. Someone always comes forward to dress it up as a commentary on the times. At the start of the pandemic, he was spotted wearing a surgical mask. During the devastating fires of 2020, against a backdrop of sickly orange skies, he wore a firefighter’s helmet.

It is the responsibility of the city’s parks and recreation department to maintain and protect the statue from everything from graffiti to bird droppings. But there are also a lot of other people watching Wes, those watching how he’s dressed and what’s on his feet. The city and the statue’s defenders tolerate much of what remains on the statue, if done in the name of good taste.

Kim Stoner of the Santa Cruz Surfing Club Preservation Society said, “You don’t know how many times I’ve pulled out my ladder over the years just to get stuff off this statue.” Stoner, one of perhaps half a dozen people who serve as the statue’s volunteer watchdogs, does well in Santa hats and Hawaiian collars. But anything political, commercial or discolored will be removed as soon as possible.

“We take things down periodically,” said parks and recreation manager Tony Elliot. “But if it’s related to a vacation or something, there’s a level of acceptance of that in Santa Cruz’s mind.”

There are, of course, many statues and monuments that are never festively decorated, or attract the attention that the surfer statue attracts. Carol Scurich worked in parks and recreation for 30 years before retiring in 2019. For years she observed how the community interacted with the statue. “People generally really respect and revere the statue of surfing,” she said. “It’s a symbol of our community, and it’s about something more than surfing. It’s something that really resonates and it’s just a great source of pride.

Often attitudes towards monuments change over time as they become part of the inhabited environment. What is controversial in its infancy often becomes a beloved community totem. Bob Rittenhouse said that years after the statue was completed, one of the city council members who voted against expressed regret over the decision. The council member apologized and told Rittenhouse, “The statue is beautiful. I love it.”

“I think that’s the only time I’ve ever heard a politician admit he made a mistake,” Rittenhouse said.

Thomas Marsh, the creator of the statue, got his commission to create the religious icons at St. Joseph’s Shrine after the construction and erection of the surf statue. He said the church pastor was inspired by the surfer across the street.

Marsh today is a deeply religious man. He said that in the years leading up to the creation of the surfing statue in Santa Cruz, “I came back from a period of atheism to a belief in God. So my mindset was very centered around that what it must have been like to be in that deep water and feel that awesome power of a wave that you have no control over except to follow it. And I thought a lot in those terms (when creating the statue I have immense respect for surfers, because how many people can truly experience the power of nature in this way? It’s a rare experience.

the rise of a surfing revolution on our shores