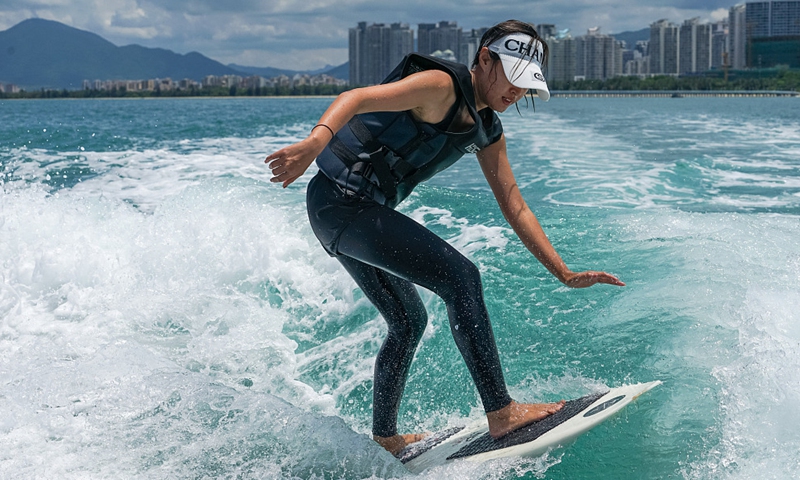 As surfing gains popularity in China, more and more people are choosing to escape the office and rush to embrace the ocean to take a break from the 996 work culture, which requires employees to work 9:00 a.m. at 9:00 p.m., six days. one week.

In the provinces of Guangdong and Hainan (southern China), more and more surf enthusiasts are heading to the sea. Some have even changed careers and become surf coaches instead of returning to the office.

â€œThere were only several wakesurfing boats in Sanya, Hainan, as of March 2020,â€ Xiao Hui, owner of â€œWakesurfing Worldâ€, a surf club established in 2019, told China News, adding that â€œone year later, the number reached 40, and the number is expected to double by the end of 2021. “

Wakesurfing has undergone a transformation on Wuzhizhou Coral Island, best known for its stunning natural landscapes, clear waters and marine resources, and a water sports paradise in Sanya. Bao Yongzhou, CEO of Hainan Quyan Water Sports, told media that “the ladder of the sport should expand as much as possible with more and more people starting to enjoy such an unusual sport, especially after the pandemic.” .

Meanwhile, the Chinese variety show Let’s Sacalaca introduced the sport to more young people as soon as it started broadcasting in July 2020.

Xichong, a village near Shenzhen, Guangdong Province, was caught in the surf fever. Crowds flocked to Xichong to learn some exciting tips from the local surf coaches. Soon the small village, with barely a supermarket, became a popular spot for its surfing and beach parties.

Jing Ling is one of the surf coaches who quit her high paying job in Guangzhou to come to Xichong. She changed careers to devote the rest of her life to surfing after hopping on a board for the first time in 2014. Jing told media that she feels great after returning to this new lifestyle.

A staff member at the Pin & Up Surf Club in Xichong told the Global Times on Sunday that many students come to town to learn.

“Our business is booming,” according to Pin & Up staff, adding that “the outbreaks of COVID-19 in Guangzhou have affected our business these days, (because) you can come from another province to learn, but you cannot come back “.