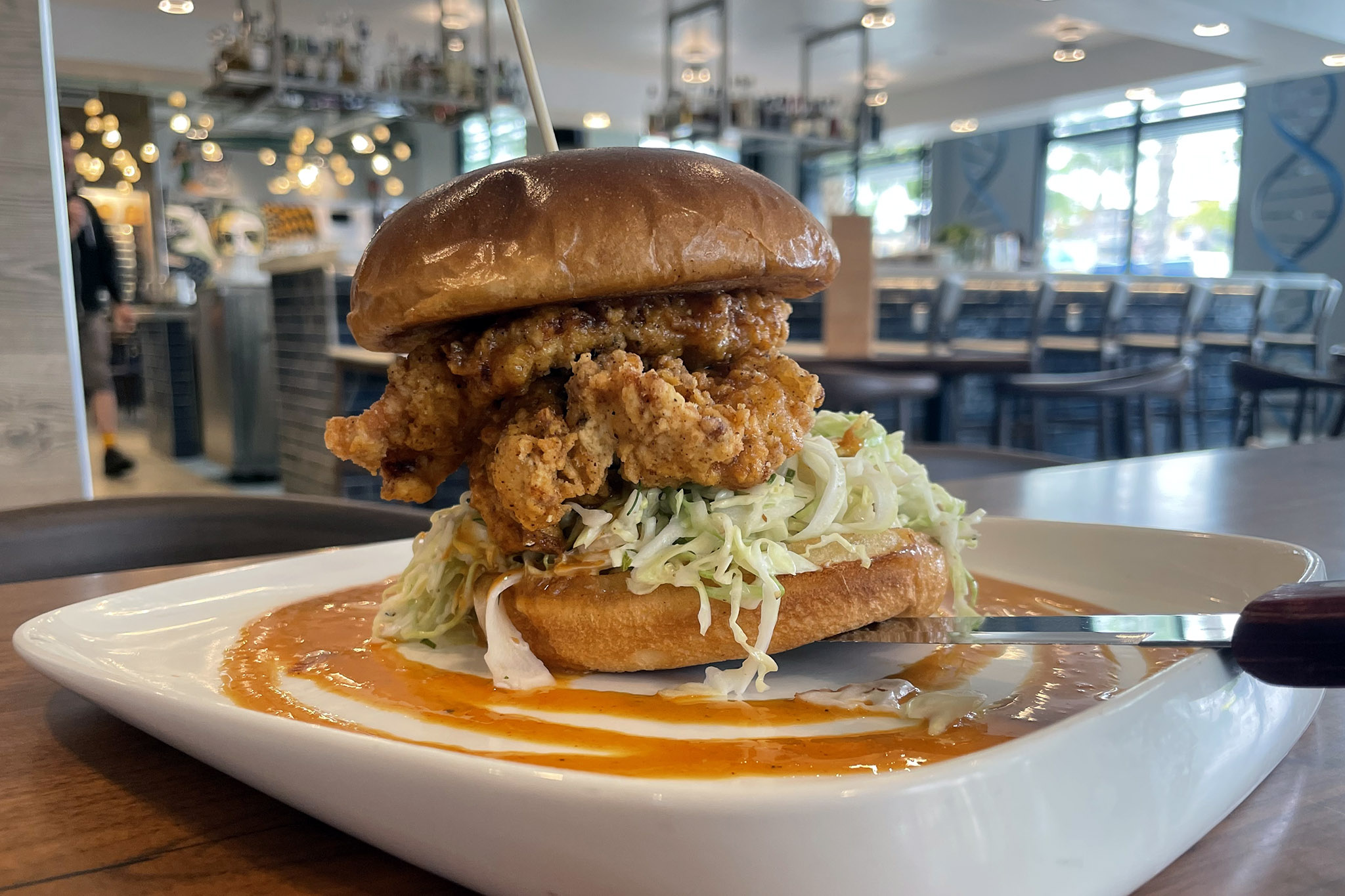 The Lab Collaborative benefits from the attentions of Oceanside

A fried chicken sandwich with bourbon and habanero sauce

If you’ve been paying attention to the travel media over the past year, you may have noticed a new appreciation for this three-mile stretch of surf and sand called Oceanside. Regardless, those who sing its praises are quick to call the “blue-collar” beach town “under the radar” or count “a quick train ride from LA” among its attributes. What matters is that travel writers like Travel + Leisure and Los Angeles Times take note.

The coverage is likely due to a series of new and recently refurbished hotels which have invested heavily in harnessing the potential of the surf town of Oside. One of them, the Mission Pacific Hotel adjacent to the pier, went so far as to install the so-called Upper gun house on his property. That is, this Hyatt resort physically transported the entire beach cottage — which had become a local landmark after appearing in the original 1986 Tom Cruise film — and dropped it off next to the one of the hotel’s two restaurants. A few weeks ago it was repurposed as a store selling handmade pies.

But I’m not writing about the Top Gun Pie Shop today. While the hospitality money poured into Oceanside may have spurred the new publicity, travel writers have rightly focused on a food and drink culture that has absolutely flourished in recent years. More than the construction of hotels, it is a series of inspired establishments that have truly transformed the city from a military town with excellent beaches, to a destination for staycation.

The Jet Fuel coffee counter, within The Lab Collaborative

In this regard, a combination bar, restaurant and cafe run by a group of the aforementioned blue-collar workers have chosen to join the fray. Just across the train tracks from the resort towns, The Lab Collaborative serves an all-day menu of appetizers, salads, hot sandwiches, craft cocktails, locally brewed beer, and locally roasted coffee. Early press reports underscore the claim that its ownership and management team combine more than a century of experience in the service industry.

Which doesn’t mean they’re old, there’s just a bunch of them. Each of half a dozen people adds their respective expertise, whether it’s cooking, researching ingredients, mixology or caffeine.

They’ve built a relatively large corner property, with a prominent island bar in a dining room that stretches out to a spacious patio. It feels tailor-made for a sunny weekend or a splashy evening, but already when it opened for lunch on a weekday, I found a robust team covering the venue’s low-key tasks: pushing cocktails, pulling espresso drinks at the on-site coffee bar (under the Jet Fuel Coffee Co. brand), recommending dishes or cooking them in a kitchen visible through a bank of large windows.

Main courses range from wine-braised beef cheeks and achiote-rubbed pork belly, to seafood linguini with prawns, mussels and local fish. These are not designated as dinner items – in fact, they are available for lunch. But there are separate menu sections offering more down-to-earth dishes, like salads and hot sandwiches, including a burger, Philly cheesesteak and birria cast iron.

While the throngs of chatty managers and employees, jostling each other, gave the vibe of a local hangout, the polish of the place and its touristy proximity to the pier suggest a presentation of the local way of life. , oriented towards foreigners. . Indeed, a massive video wall in one corner showed a promotional video for the Lab Collaborative. The video moves from surfers on the local airwaves, to sped up footage of the bustling restaurant, in service, to shots of managers and partners, smiling and laughing, cooking or mixing cocktails in slow motion. The running loop makes the locals the stars of their own show, rather than a building once used as a filming location.

The interior of Lab Collective, featuring a video wall with a looping promotional video

In a way, I guess the place reflects a tension between that old blue-collar notion of Oceanside and its impending role as a “tourist hotspot”. Mains hover around $30, while salads and sandwiches hover around $20. On the one hand, there are high starters balanced by vegan alternatives. On the other, a big fried chicken sandwich served on a plate of bourbon habanero sauce is a best seller. Nicknamed Oside or No Side, I guess the dish is named after a local rallying cry. But there’s an apparent double meaning: the $21 sandwich doesn’t actually include a side dish. So a chicken sandwich, fries, and a beer will net you over $30, before tip. For that kind of money, elsewhere in Oceanside, you can get a fried chicken sandwich topped with caviar.

Yes, we can thank inflation, rising ingredient costs, and service workers earning closer to their value (and on the face of it, attendance at this establishment supports quite a few). But it looks less like a place where longtime Osiders might flock and more like a way for local workers to get a slice of Oceanside’s new destination status.