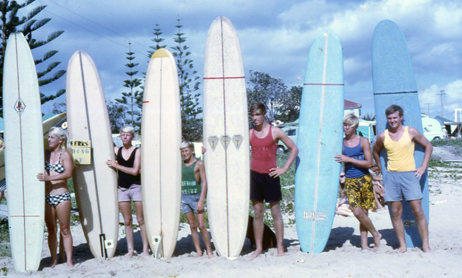 the rise of a surfing revolution on our shores

It was a time of bodgies and widgies, Brylcream and loud cars; a time to break with 1950s conservatism – and the backdrop for something big to come to the Sunshine Coast. Surfing.

It was a subculture that stood for freedom and being part of the revolution; young men who grow their hair long in defiance of authority. It was the time of hippies and protest marches against the Vietnam War.

Caloundra had a population of less than 2000, so most of the local children knew each other and hung out together. And this is where a generation unknowingly found themselves the pioneers of surfing on the Sunshine Coast.

They surfed because it was freedom. They were breaking away from the control and rigidity of the 1950s.

The legendary Pa Bendall created the Moffateers, a group of young surfers who took their sport seriously.

He was there to line up the free radical kids of the day and formed a club where he could keep an eye on them.

Help keep more great memories of the coast by subscribing to our free daily news feed. Go to Subscribe at the top of this story and add your name and email. It’s so simple.

But before surfing became a serious and competitive sport, there was a beginning; when, of all the beaches on the Sunshine Coast, only Caloundra, and in particular Moffat Beach, had surfers on boards riding the waves just for fun. They were young people making a statement.

They all rode long boards, over 9 feet. As the 60s progressed, boards got shorter – and over the course of a decade the big mals gradually gave way to 5ft to 6ft boards, which eventually transformed surfing from simple freedom to competition.

The local guys have marked their territory. In the beginning there were about 60 local surfers in all, more than half of them in Caloundra and they hated it when the Maroochydore boys came down but mostly the north coast hated it when the “Brisos” came in and invaded the guy from the corner.

The words “Brisos go home” appeared on the cliffs at Moffat Beach and this painting has been regularly touched up to keep the message clear.

In the era of Kombi vans and vans, there was a distinction between surfers and surfers.

A surfer was a dropout who bleached his hair with peroxide, put boards on roof racks and drove the streets looking cool.

Surfers, on the other hand, sought peace and freedom and found it on the beach. While they searched for the perfect waves, their girlfriends sat soaking up the sun and waiting.

They hung out on the beach and left the streets to rockers, bodgies and surfers.

At night, regular dancing at the Alexandra Headland Surf Club was the only organized entertainment on the coastal strip. The boys showed up in purple slacks with white belts and paisley shirts, their hair slicked back with California poppy and later, hanging down to their shoulders. The girls wore cheesecloth, big wooden sandals and patchouli oil.

Old cinemas like the Strand in Caloundra, the Beach in Mooloolaba and the Star in Maroochydore could still attract crowds screening surf films like ‘Hot Generation’, ‘Morning of the Earth’ and ‘Endless Summer’.

The road from Caloundra to Maroochydore was dirt and you could drive along Currimundi beach. Famously, behind Bokarina was Shangri-La, a nudist beach that every youngster visited at some point just for fun.

You could start a fire on the beach when you came back from surfing and even sleep at night and no one noticed, let alone cared.

Not so lucky was that it was the height of the Vietnam War and young men lived with the threat of having their freedom taken away by conscription or national service and the fear that their birthday would be mentioned in voting.

Surfing and the freedom it brought were part of a period of radical change that continued through the mid-70s. It came along with rock, protests and hippies. It was the changing of the guard of 1950s conservatism.

This flashback is brought to you by Sunshine Coast journalist and history writer Dot Whittington, who is also the editor of Your time magazine.

Icons of Santa Cruz: The Centurion of West Cliff Drive