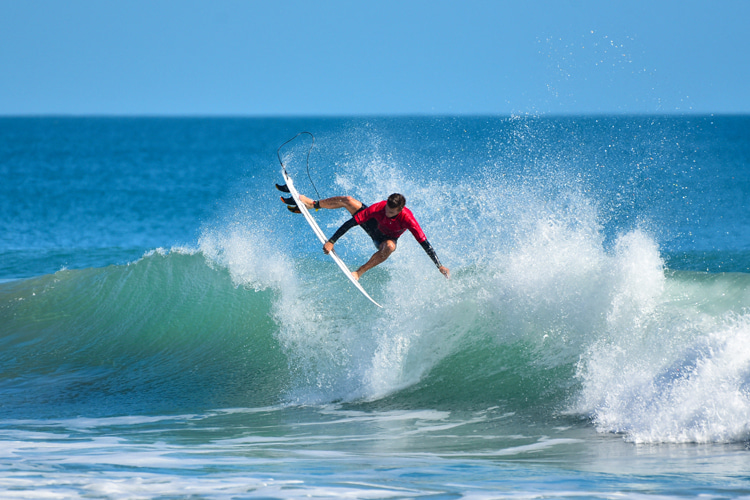 the surf capital on the east coast

It doesn’t have the best waves on the planet, but it’s one of the busiest surf centers in the United States. Welcome to Cocoa Beach, Florida.

Cocoa Beach is a beach resort located on a barrier island just an hour’s drive east of Orlando on the Sunshine State’s beautiful Space Coast.

The city of Cocoa Beach as we know it today was founded in 1925.

However, the place was first settled by fishermen around 1860 in what was originally called Indian River City.

The region and Brevard County did not explode until the establishment of the missile launch facility at Cape Canaveral in 1949.

And surfing too, a sport that had crossed America and was about to conquer the world from west to east.

The place has been visited by surfers since the 1950s, when a group of wave enthusiasts regularly left South Florida with their longboards to surf Cocoa Beach and Melbourne.

Pat O’Hare and Rick James learn the art of shaping surfboards at the Greg Noll Factory in Hermosa Beach.

In 1963, the duo moved to Cocoa Beach and founded James and O’Hare Surfboards.

The weather would propel the surfers of Cocoa Beach and Florida onto the world stages.

Space and surf: the perfect marriage

Missileland USA quickly became one of the most popular surfing destinations on the East Coast, although initially almost every company had names related to the space.

Interestingly, the space age sort of coincided with the surf age.

However, it is important to point out that the first waves surfed in Florida date back to the beginning of the 20th century.

“Cocoa Beach has a rich history of surfing. Newspapers show that surfing began as early as 1909,” says John Hughes of the Florida Surfing Museum.

“But in the 1960s, it became the epicenter of surfing for a number of different reasons. The waves here are the right balance of surfable and great weather, so it attracted people here.”

â€œMuch of this was also driven by the Space Center. There has been a rapid influx of young families moving to the area to support the space program.â€

But there is another variable that was also relevant to the surf explosion in Cocoa Beach.

â€œThis is probably one of the best areas in the state when it comes to beach access. Lots of areas are restricted, but you can really surf anywhere in the county,â€ adds Hughes.

Most successful competitive surfer of all time, Kelly slater, was born in Cocoa Beach on February 11, 1972.

The 11-time world surfing champion grew up in the surfing paradise of Florida and as a teenager won four straight U.S. Surfing Championship titles in both menehune and boys divisions.

At 14, Kelly Slater won the boys and pro divisions at the Easter Surf Festival held at Canaveral Pier, the former designation of Cocoa Beach Pier.

First held in 1964, the Easter Surf Festival is one of the oldest surfing competitions in America.

Along with Sebastian Inlet, Canaveral Pier is one of Florida’s most iconic surf spots.

It was built in 1962 and began to concentrate sand around it, which helped amplify less powerful swells and create waves going from the waist to the chest.

Despite its reputation as the “small wave capital of the world”, the truth is that the place has served as a magnet for future surf champions and professional athletes.

On November 17, 2010, Cocoa Beach unveiled the 10-foot bronze statue of its surfing hero on the waterfront promenade, with the mayor officially declaring it the date “Kelly Slater Day”.

The surf capital of Florida is also known for an unusual tradition – Surfing Santa.

“In 2009, I saw an advertisement for a Honda car on television showing guys surfing in Santa Claus costumes in California,” said George Trosset, founder of the initiative.

“And I thought, ‘I want to be a surfer Santa Claus.’ So I asked my wife to make me a Surfing Sant outfit, called my son and asked him to meet me at the beach. “

“I told him, and his wife had to be dressed as an elf. I’m going to be Santa and we’re going to surf.”

“The newspaper introduced itself, took some pictures, and on December 25, 2009, the front page of Florida Today was a photo of me riding a wave in Santa Claus costume.”

The following year, George had 19 friends who followed him across the cold waters of the Atlantic Ocean.

The lively and laid-back small seaside town is also known for its iconic pier that stretches 250 meters above the Atlantic Ocean.

Although Cocoa Beach has only 12 miles of coastline, the city’s name is often used as a shorthand for a 72-mile stretch of Brevard County that includes Satellite Beach, Indiatlantic, Melbourne and the best-known surf spot in Brevard County. the state, Sebastian Inlet.

Cocoa Beach is the ideal place to learn to surf and for any beginner wishing to progress and improve.

But it is also the ideal playground for experienced surfers. Cocoa Beach is the ultimate beach break, with all types of waves.

There are no rocks or reefs – only a shallow sandbar where beginners can easily take out their surfboards.

Cocoa Beach has a surf atmosphere and prides itself on promoting the surf lifestyle on the American Atlantic Coast.

The surfing heart of the East Coast has everything you need to have an unforgettable time in the water – board rentals, surf lessons, beachfront accommodations and great restaurants.

In 1999, a Surfing magazine article posed the controversial question, “Why are the guys at Cocoa Beach so good when the waves are so bad?”

â€œGreg Loehr thought it was because the local surfers were competitive with each other but united in their willingness to prove something to the rest of the surfing world,â€ Matt Warshaw writes on â€œThe Encyclopedia of Surfingâ€.

Loehr believed that “we surf for fun, but also better than Californians”.

Cocoa Beach’s shoreline faces east, which means the sun rises in the ocean and sets behind the city.

It’s directly and fully exposed to the Atlantic Ocean but doesn’t get much swell except during hurricane season.

In good weather, each dead end access road leads to a surfable peak.

The waves are generally longer and softer at low tide and tend to become a shore break at high tide.

The best practicable swells appear from September / October to March and vary from three to ten feet.

In summer, the waves generated by the sea breeze create choppy and sloppy conditions. The exception is when hurricanes moving from West Africa to the Caribbean from August to October produce quality waves.

The most predominant wind direction is west and southeast in summer, and north and northeast in winter.

Offshore winds rarely show up when decent swells arrive, and lightning strikes can force surfers out of the water during the best surfing months.

Finally, it is important to point out that Florida is one of the regions of the world with the highest number of shark attacks.