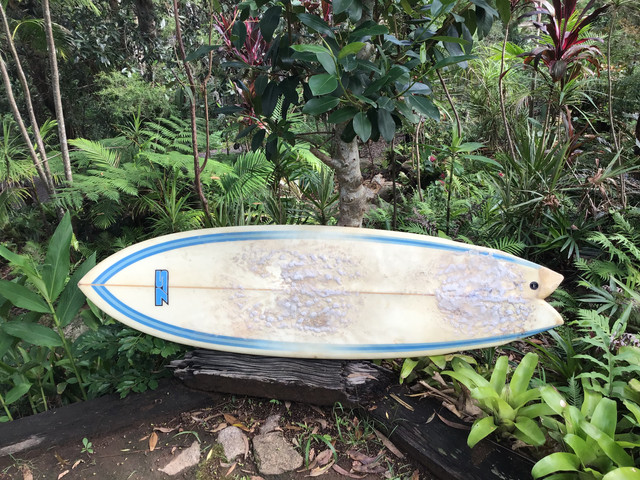 The saying goes that there is no bad surfboard.

A board may look bad because it’s associated with the wrong rider or maybe the wrong waves, but it’s argued that all boards are legit on their own. While that may be true, it’s also true that not all boards are loved equally. Because a surfer’s love for surfboards goes beyond practicality. Surfers love surfboards because they trigger emotions.

A pro model short board carries the promise of peak levels of performance. The niche shaper’s retro fish carries the lineages of high lines spanning decades of country soul. The ’80s thruster packs the wild spirit of a reckless era into its goofy volume.

The 70s brown fin, the shiny malibu and the core shaper’s specialized tubular spear all represent an emotional attachment to the surfer that is greater than the sum of their physical manifestation and their literal interpretation of surfing.

These boards all evoke an attitude and spirit that adds a romantic element to the idea of ​​the ride. A palpable quality that lends surfers to idolizing boards throughout history…Sam . Black beauty. The inverted V without sticker. The low-volume magic liner.

Collectors pay dearly for this intangible metric of the soul. Performance levels increase on confidence attributable to this unquantifiable notion.

Surfboards are therefore not loved equally. Not all surfboards possess the magic that attracts admiration.

There is no love in the world for the 7S.

It’s backstory is all wrong for a start. Conceptualized as a mass-produced board by a faceless company. Made by automation and a workforce for whom surfing is an abstract and foreign activity. Sold worldwide without regard to local surf conditions or rider sensitivities.

A slap in the face of the mystique of the shaper as a guru.

And yet… and yet the 7S Super Fish works.

As stated….there is no such thing as a bad surfboard.

Good luck getting people to swallow this line when looking at a brown decked 7S whose bottom has regular disfiguring craters and every point and rail is subject to shoddy repair beatings to varying degrees.

Not that the condition matters. The 7S was uninspiring when it was brand new.

I still vividly remember when I first laid eyes on it 15 years ago. I had suddenly found myself doing low-period beach breaks for the first time in years and was completely unequipped for the waves on offer. Everyone was going full throttle and so I got caught up in the Fish Movement.

But there were no heated discussions with foam-covered shapers for me. No serious reduction in requirements with local moss sage to work out exactly what form of fish I should mount. It was straight to the nearest board retailer and I caught the first fish I laid eyes on.

So I found myself in possession of a Super Fish.

It was the first board I bought that I wasn’t completely in love with. Maybe it was because the 7S was more functional than anything else. I needed it to be able to surf the available waves. It’s not like I was opening up unimaginable areas of performance, it was more like pure utilitarianism. And that’s non-romantic shit.

Looking at the board in the racks, it wasn’t sexy or impressive. It was a case of that, go to the cash register and get the hell out of here.

Luckily the board worked as stated on the package.

Catch the waves with ridiculous ease. Gain speed immediately and run through the deadliest sections. Bit sexy, but the 7S opened up a whole new world of surfing.

Soon I was driving the 7S exclusively.

The days I wouldn’t have surfed before due to poor wave quality have become days at the amusement park. In fact, I would see skinny wave predictions extending into the future and I would get excited. So many breaks that I had considered incredibly bad became places to savor.

At this point, I was surfing alone almost every session. The leg rope was gone. It was a shitty beach every day and some of the most enjoyable surf days I’ve had.

Walking from where I was staying through bush tracks to the secluded little breaks that surround the area. I wouldn’t see anyone. Just a boardshort and the board under your arm. A backpack with water, a tin can, some fruit and enough scoobs to make sure I get high all over the place. Surf, relax on the beach getting cooked and revitalized, then go again.

I started falling for the super fish 7S.

But no one else could even begin to conceive of the beauty hidden within her Plain Jane exterior.

One day, some friends came for a surf trip. We all took some proper fun boards to a small secluded spot hidden away in the coastal rainforest. Putting all the boards on the sand, we exchanged and shared. Comparing and contrasting.

But not once was the 7S mounted.

Passed for the funky seventies single with the deep flyers. Neglected for flashy Eighties Thruster graphics.

The 7S was not sexy. Not new and shiny, not yet an antique. It held no modern promise or past nostalgia.

It was the least glamorous surfboard on the planet.

Unrepentant, I continued to love the 7S.

The advantage was speed, speed and more speed. The fastest board between two points I have ever ridden. It chews through flat water and high lines of impossible sections. No rocker and no curve in plan are conducive to this. It’s all about projection. It’s a beautifully stable platform to center on in weak waves.

The downside was that carving is virtually impossible. It will run no problem. Turn on a penny. Sitting on a rail for an extended period is simply not sustainable.

He also hates the tube more than any board I’ve ever ridden. The Super Fish doesn’t want to sit in a barrel full of power. He does not like to turn in the pocket.

Turns out the most hateful board on Earth still has a lot going for it. Fifteen years later, the thing is still in respectable condition considering it’s been treated with complete disregard. It has never been in a board bag and if there are multiple boards in the car it will be the 7S that will cap the wax all over its planing surface. For a board straight out of a factory in Thailand, it’s surprisingly durable. The bridge is barely dented. I’ve had a lot of boards that felt worse after several surfs.

In conclusion, I would recommend a 7S any day of the week. It may be ridiculed by surf connoisseurs and it may be as sexy as a dirty diaper, but they’re cheap and they’re available. With the world looking economically unstable and the threat of climate change still hanging in the balance due to the overuse of the planet’s resources, there are far worse things you could be doing for yourself and the environment than you get a board for almost nothing on the second-hand markets. on line . Just because a board is cheap, stained, and unloved doesn’t mean it doesn’t work.