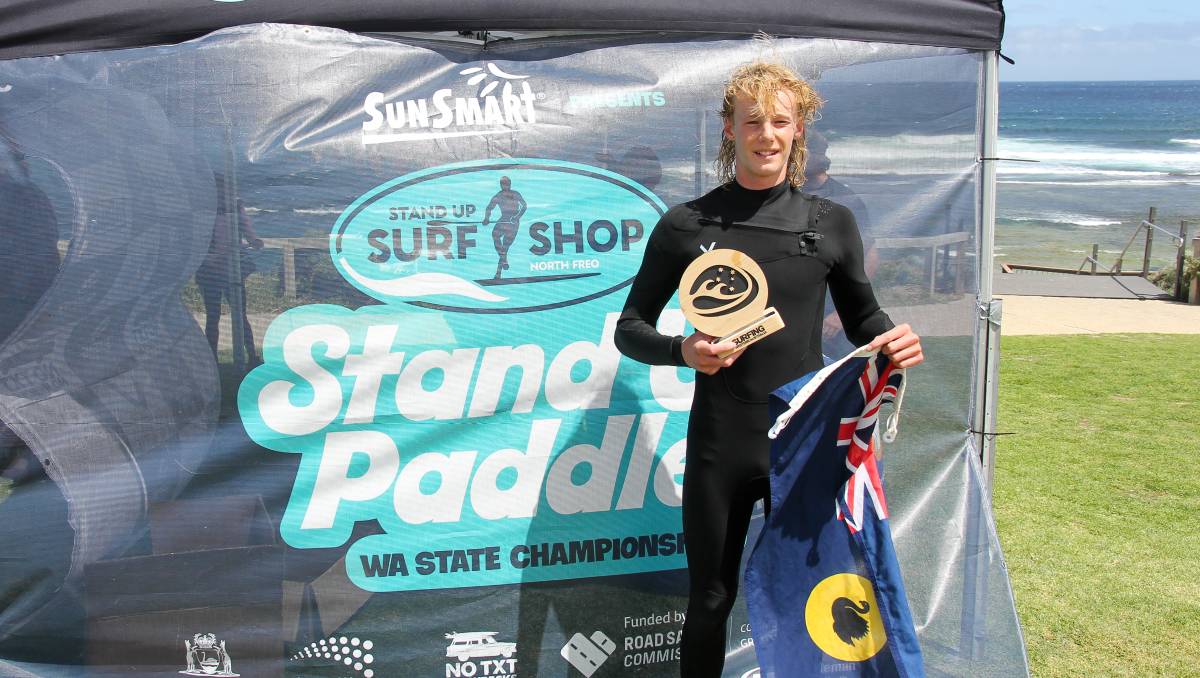 Competitors converged from all over WA in hopes of getting some quality surf, but faced strong, gusty winds with waves in the 3-4ft range during the three day event.

Surfers Point turned out to be a great place, with Southside handling strong crosswinds.

Gracetown’s Rick Jakovich proved he’s still one of WA’s best watermen, winning the hotly contested Open Men’s and Over-40 Men’s divisions in style, becoming the first of many multiple-event winners across the ‘event.

Jakovich found a good rhythm with the ocean, catching some of the best waves of the event and continued to do so during the 25-minute men’s final.

Cutting through the bumpy conditions with great speed on every turn, Jakovich posted an impressive two-wave combined total of 16.00 (out of a possible 20), which included an 8.67 and a backup 7.33.

Susannah Wilson of Cottesloe was another impressive performer in the powerful waves off Margaret River. Photo: Surf WA/Majeks

“It has to be up there in my three toughest events on an SUP,” Jakovich said.

“Lefts out there can always be in the right direction of the swell, I found some good waves today that I’m happy with.

“It’s always good to have an event in good waves, but a little less wind could be good next time.”

Jakovich maintained his form in the men’s over-40 final, dropping another towering two-wave total of 15.77 (out of a possible 20), knocking out Jake Jakovich (Gracetown), Darron McNab (Karrinyup) and Peter Tomsett (Greenwood).

“It’s always nice to have one on your younger brother, but having it twice is even better,” Jakovich joked.

“I’m thrilled to get the double win and it would be great to ride with him and against him hopefully at the Nationals.”

Cottesloe’s Susannah Wilson was another impressive performer in the powerful waves, riding with confidence and precision to claim victories in the Open Women’s and 10ft Open Women’s divisions.

Wilson sliced ​​and diced his way through the chop to amass a two-wave total of 10.90 when the final siren sounded.

“It was pretty extreme out there,” Wilson said after his round.

“Thank you to the girls who came with me and pushed me all the way. Thank you for all the support we have here, I love this wave, but I saw a new side to it this weekend. end.”

The top honors were reserved for Crawford Olney (Spearwood), who was the standout surfer of the event, earning a hat trick of victories, which included victories in the Over-50 Men’s, 10ft Open Men’s and 10ft Over divisions. -50 Men’s.

Olney’s triple win created a small slice of history and provided a memorable end to what was a standout event for him personally.

“It was a massive event, with great waves, but tough conditions,” Olney said.

“Everyone I’ve surfed against in the last three days has really cracked up, so to come away with multiple wins in really tough conditions means a lot to me.”

In other weekend results, Silvia De Araujo (Scarborough) showed great commitment which was a key ingredient in the success of the Women’s Over 40 Final.

Ryder Vernon (Yallingup) has proven himself to be a force to be reckoned with with rapid improvement since 2021 seeing him knock out junior under-18s.

Yallingup’s Richard Wain defended his 2021 state title with victory in the men’s over 60 division.

2022 marked the first time the tournament has traveled Margaret River, with a group of quality competitors now aiming for the 2022 Australian SUP titles, to be held on wave-rich Phillip Island, VIC.

“I want to congratulate all of our competitors and new State Champions for their outstanding efforts here in Margaret River,” said Justin Majeks, Events Director of Surfing WA.

“The courage and bravado displayed by all of our competitors is to be noted and I love the atmosphere and encouragement that SUP events provide. We certainly build them hard here in the West.”

Rick Jakovich captured the West Coast Suspensions“Weekend Wave” for an excellent 8.67 (out of a possible 10) in the Men Over 40 final.

Crawford Olney walked away with the Auto Masters ‘Memorable Moment’ Award for his hat-trick of wins throughout the three-day event.

*combined totals of the 2x finals

*combined totals of the 2x finals