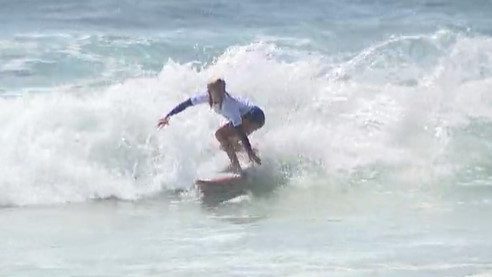 OCEANSIDE, Calif. — The largest women’s surfing event in the world is underway in Oceanside.

The competition, which started Friday and lasts through Sunday, has brought together thousands of people to watch the biggest and best surfers, including Olympic gold medalist Carissa Moore and icon Bethany Hamilton.

“It’s so awesome to see these girls tear it up,” said spectator Maddier Storrer, who flew to Oceanside for the event from Santa Cruz.

On a typical hot summer weekend, you’ll find the ocean packed with local swimmers and surfers, but this weekend the blue water served as the national stage.

“I love Bethany Hamilton,” said aspiring pro surfer Kirra Huntress. “We get to see, like imagine that we can also surf in this heat.”

Many aspiring professional surfers spend the weekend watching those they admire surf and dream of coming back to compete.

“I’m really inspired by this because I hope one day I can do this and be with all of them”, viewer Island Hardy said.

For Oceanside native and surfer Lucy Garrard, her dream came true this year.

Shore House at The Del opens in Coronado

Lucy and her sister are the first American-Samoan surfers to surf in the World Surf League. After participating in this event, they go to the Olympic qualifications.

“I used to come and watch this with my sister, so it’s kind of weird to be there now, but I feel really grateful to be there and to have this opportunity,” Garrard added.

She says she wants to be a role model for other American Samoan girls and show them that they can achieve anything they want.

The Super Girl Power was felt from the ocean to the vendors, where local artist Nicole Miller turns old surfboards into works of art.

“It’s amazing and it’s just empowering for women in all departments especially the art, I mean the art of surfing in general is kind of male dominated so it’s really cool to be here and to be represented,” Miller said.

Miller was an art teacher in school, but pursued his passion in creating art full time and now creates surfboards, and even ones that can be taken in the water.

The event brought something for everyone, from a military appreciation program to food, vendors, dancing, free concerts and more.

It also included the US Air Force’s “Born to Fly” virtual airborne experience, which gives everyone the chance to experience, through virtual reality, piloting an F-16 fighter with a throttle and an actual flight stick or the use of a replica boom pod to refuel aircraft, virtually, in the sky.

Food and Dining in Metro Detroit